Learn how to use powerful affirmations for success | wisdomways.net 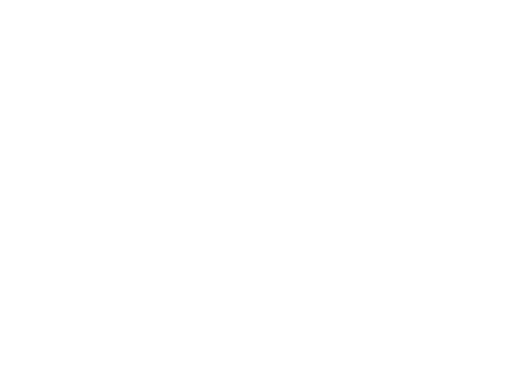 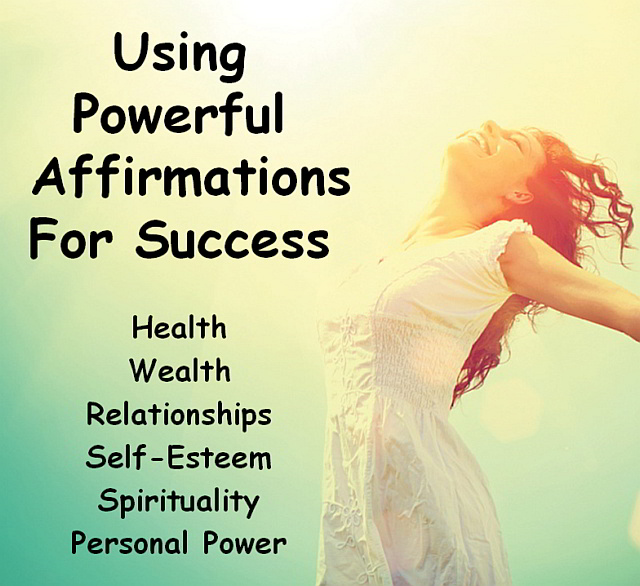 What are powerful affirmations?

Many people use positive affirmations for success. Think of positive affirmations as personal, positive beliefs that you want to have support you in reaching your goals in life.   These goals could be anything from  changing a behavior or habit that no longer serves you,  to creating new habits and behaviors that  do support you.  Powerful affirmations can be helpful to achieve goals in any area of your life. For example, if you are struggling with physical health issues, healing affirmations have been known to help people heal or heal faster, sometimes miraculously.

Why are affirmations important?

If you want to change your life, let go of struggle or efficiently achieve certain goals, you will need to know how to change your subconscious beliefs effectively. This is where powerful affirmations for success come in. Powerful affirmations are the 'new programs' which you want your subconscious to adopt and run automatically. Programs such as, "I am healthy." or "I am confident and secure in my work."

⇒ Can you imagine being able to erase all the programs for ill health or poverty and automatically run new programs that bring you health and abundance in every area of your life?

⇒ Can you imagine being able to perceive the world through as filled with love, peace and joy instead of through belief programs attract and create fear and stress?

It is important for everyone to know how to use powerful affirmations for success.

How to create your own powerful affirmations

The best affirmations or belief statements take a particular form.

In the proper form, powerful affirmations are:

You can find many examples of positive affirmations for success in the sample list of powerful affirmations below. But remember, affirmations are only powerful if they are specific to your needs, and you know how to get them effectively and efficiently into your subconscious mind. The best affirmations will often be reprogramming or 'disintegrating' your limiting beliefs. 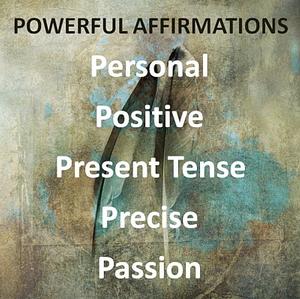 Can powerful affirmations help you?

The simple answer is yes. If you have a goal to achieve or an experience or behavior that you wish to change, then you will want to have powerful subconscious beliefs supporting that change rather than sabotaging you. If you are finding  it a struggle to change certain areas of your life, then it is pretty much guaranteed that your subconscious beliefs are playing a role in that struggle and keeping you stuck in the old patterns. To achieve your goals with greater ease, it is important to make a conscious decision to do effective subconscious mind programming.

Think of the subconscious like a computer. Positive powerful affirmations are the NEW desired subconscious programs or 'coding' to create new 'outputs' or 'printouts' that the computer will run automatically. You can consciously decide what new programs you want to run, but you also need to know how to get those programs (affirmations or beliefs) into the computer (subconscious mind) effectively and efficiently.

How can you  program powerful affirmations more efficiently?

As children, the subconscious mind is wide-open to accepting new programs. Children are in highly programmable 'brain states' (Delta, Theta and Alpha brain waves) which allows them to quickly learn the skills  and behaviors they need to thrive and survive. However, by about age 12, this 'brain-state' has shifted to a primarily 'Beta' brainwave which does not lend itself well to new programming, except by constant repetition of affirmations or repeating behaviors over and over again until they become new habits run automatically by your powerful subconscious mind. 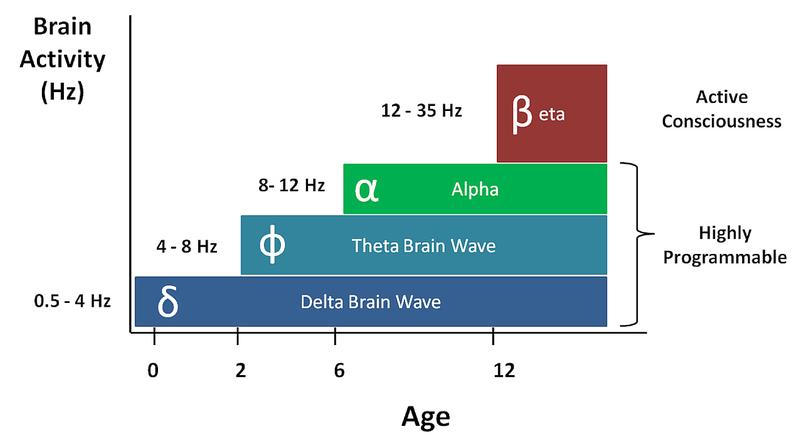 The way that most people have learned to  program affirmations into their subconscious mind is to repeat the affirmation over and over again until the behavior has changed or the goal is achieved. On average, this means that a person needs to say the affirmation hundreds of times per day for about a month! Yikes! This just isn't practical, especially since most of us have hundreds if not thousands of limiting beliefs that need to be reprogrammed. Very few people have the discipline to repeat an affirmation hundreds of times per day. There needs to be a better way.

It is crazy to continue to do affirmations the old way, except as additional support. Instead of saying an affirmation  over and over again, it is more effective and efficient to get yourself into a 'highly programmable' brain state such as Alpha, Theta or Delta. Meditation, hypnosis, as well as new sound technologies can help with this. Often, these sound technologies  are combined with subliminal positive affirmations. As you listen to the  sound, it  puts you into an Alpha brain-state and the new positive affirmation just slides into the subconscious as if you were a child soaking up and learning new beliefs from its parents.

In addition, there are new affirmation or belief change systems such as my Refreshing Beliefs Method  course where you can easily learn how to reprogram your limiting beliefs in just a few minutes without any special skills like hypnosis or any sound technologies. This method for programming powerful affirmations for success is simple, effective and safe.

Many people find that affirmations don't work - even using  the more efficient techniques mentioned above.  When I taught PSYCH-K® which was endorsed by Dr. Bruce Lipton in his book, "The Biology of Belief," I found that beliefs could be changed quickly and easily but unfortunately many people still did not experience the full results they were looking for. In my experience, if you are just focusing on programming the new positive affirmation into the subconscious, you will get limited results. And why are you doing this work? To create change — results! With no results, people give up and say, "Affirmations don't work!" But that is not completely true.

My experience is that powerful affirmations (or changing limiting subconscious beliefs) do work, but this is only one piece of the change puzzle.  Doing affirmations alone, often gives limited results. For example, you can do all the belief change you like, but if you do not consciously take the necessary actions to support the change, then you may not achieve the goal. For example, you can have all the positive subconscious beliefs to become a medical doctor, but if you don't register for University, do the studying or write the exams, then you will not become a recognized doctor. 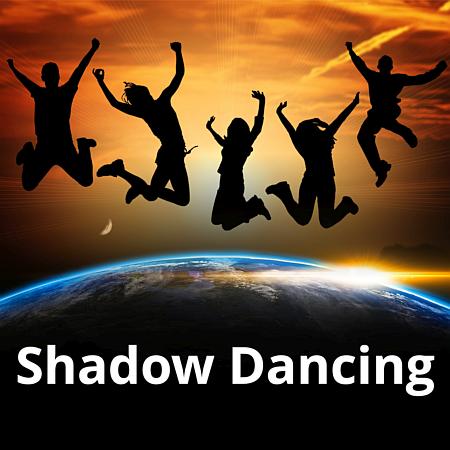 How do you find the best affirmations for you?

As mentioned, not all affirmations are equal and not all are relevant to you. You are unique and have specific limiting beliefs with specific emotional triggers that others do not have in the same way. Therefore, although a list of positive affirmations, is very helpful, you also need to learn how to create your own powerful positive affirmations.

The Bottom Line of Affirmations

So, what is the bottom line?

Clearly, everyone needs to be able to change their subconscious beliefs if they want to get out of the struggle of life and achieve their goals. It is a critical life skill. However, belief change is just one of the necessary skills on your path to a fulfilling life and in reaching your true potential. Don't stop with affirmations or belief change. Also learn how to forgive, learn how to embrace your shadows and learn how to surrender to Spirit and let Spirit/God guide you to ultimate joy! Learn to accept that you are inherently resourceful, whole and everything you need to be.

On your path, it can also be helpful to have a coach, mentor or guide that has mastered many of these life skills who can help you navigate life when you are feeling stuck or are stretching to new goals and opportunities. Please contact me if you would like to explore a long term mentoring relationship or a few private sessions to get you unstuck and back on track.

Richard Schultz assists leaders in unlocking their true potential, authentic power and inner wisdom to create extraordinary, high impact lives. Courses and Life Mentoring with Richard can help you live your legacy and build your capacity to thrive with change!